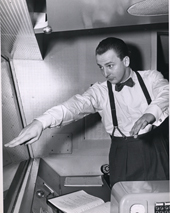 Fletcher Markle began his career as a writer, director, and producer in Canada and England. His work in the U.S. included Studio One and the Ford Theatre.(Photo right: Fletcher Markle edits his script for Studio One, a radio program he produced and directed in the late 1940s.)

This collection includes 102 bound volumes and additional materials from radio, television and movies: