The Thousand Oaks Library offers Curbside Pickup Service. Get more information.
Fines and fees will accrue for materials checked out on or after May 26, 2020.
The Passport program has been temporarily suspended and all the appointments have been cancelled.
Please visit the City of Thousand Oaks website for information on the current COVID-19 situation. 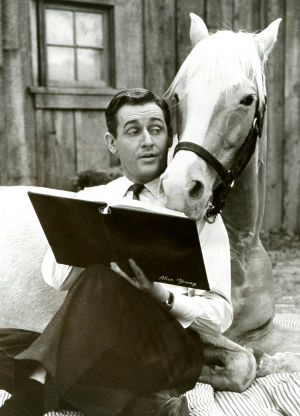 After a start in Canadian radio at the age of 13, Young moved to American radio with The Alan Young Show in 1944. His film debut was Margie in 1946 and a year later his radio show moved to TV. Other movies followed, incl. Androcles and the Lion (1952), Tom Thumb (1958) and The Time Machine (1960). He is best known, however, for Mister Ed (1961-66), a CBS television series, in which he starred as Wilbur Post, the owner of Mr. Ed, a talking horse. Young's voice-over roles include Scrooge McDuck in numerous Disney films and in the popular series DuckTales and roles in The Great Mouse Detective, Batman: The Animated Series, The Smurfs and The New Scooby-Doo Mysteries. In 1997, he did the voice of Haggis McMutton in the PC game, The Curse of Monkey Island.